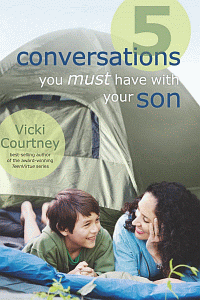 From the cradle to college, tell your sons the truth about life before they believe the culture’s lies.

I don’t know about you, but I’m not one to sit on the sidelines in a spirit of defeat and point the finger of blame over the current state of manhood. I have a feeling you’re probably a lot like me or you likely wouldn’t have picked up this book. Rather than dwell in depth on how we got here, I would rather focus the conversation on where we go from here. In other words, what are the solutions? Again, only in understanding the temper of the times will we be able to come up with an effective game plan and move forward.

For parents with boys newborn to eighteen, 5 Conversations You Must Have with Your Son will be as much a part of the boyhood journey as those Legos you’re still finding under the sofa cushions and the garage full of sports equipment. Award-winning youth culture commentator Vicki Courtney helps moms and dads pinpoint and prepare the discussions that should be ongoing in a boy’s formative years.

Fully addressing the dynamic social and spiritual issues and other influences at hand, several chapters are written for each of the conversations. These include:

Don’t define manhood by the culture’s wimpy standards; it’s okay to be a man!
What you don’t learn to conquer may become your master.
Not everyone’s doing it! (And other naked truths about sex you won’t hear in the locker room.)
Boyhood is only for a season. P.S. It’s time to grow up!
Godly men are in short supply-dare to become one!

The book also offers invaluable tips on having these conversations across the various stages of development: five and under, six to eleven, and twelve and up.