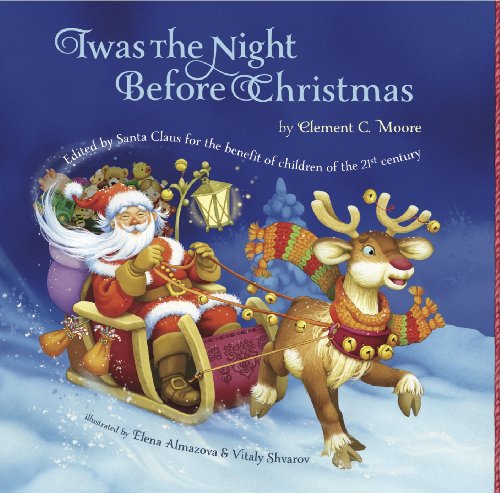 Twas The Night Before Christmas: Edited By Santa Claus for the Benefit of Children of the 21st Century by [Santa Claus]

Gold Medal Winner 2012 Moonbeam Children’s Book Award Best Holiday Book. 1st place winner for the Global International Best Christian Children’s Book. This colorful and bright edition was created for young readers in mind. Attracting global media attention, The BBC, The View, The Colbert Report, New York Post, Huffington Post and many others for what the Kirkus Review calls a legitimate editing of the reference to the pipe and wreath of smoke for the first time in the history of this the most famous poem in the English language. This is the edition that is credited with having Santa stop smoking after 189 years and for taking a small bite out of history. The public health sector, parents, educators and grandparents have applauded and welcomed the addition of this child friendly edition. Winner of 4 IBPA 2013 Benjamin Franklin Awards, including first place best cover, Moonbeam Children’s Book Awards 2012 Gold Medal best holiday book, first place at the Global International Ebook Awards best Christian children’s title, gold place for the Mom’s Choice Awards in 2013. The edition is the first in the poem’s 190 history to present Santa Claus as smoke-less. This small yet significant edit captured international media attention including the New York Post, Associated Press, NBC Nightly News, The Colbert Report and The View. The debate over the edit went to the airwaves,including the BBC, and National Public Radio. The book became a *bestseller on Amazon.com in both 2012 and 2013 with hundreds of positive reviews to its credit. Over 1,000 children aged 3-7 were interviewed about smoking and the result was that 98% of them wished no one smoked. This was produced with these children in mind. Positive reviews: Kirkus, Midwest Book Review,Resources Children’s Literature Journal.

Twas The Night Before Christmas: Edited By Santa Claus for the Benefit of Children of the 21st Century Kindle Edition