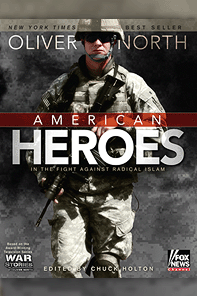 Details
What is a Hero? New York Times best-selling author Oliver North says, “Real heroes are selfless. Those who serve America in harm’s way in the war against radical Islam have that quality in abundance. And so do their families and loved ones at home. Yet, they rarely get the attention or coverage they deserve.

“Despite the way they are presented by too many in the press and politics, the men and women in uniform today are overwhelmingly good. I never cease to be amazed at the self-discipline of these brave young Americans. They can endure the adrenaline-pumping violence of an enemy engagement, and then, just minutes later, help school children get safely to their classes . . . No nation—ours included—has ever had a military force better than the one we have today. I’m proud of them. You should be too.”

In American Heroes (a New York Times, Wall Street Journal, and Washington Post best seller), North offers an inspiring, first-hand account of the extraordinary men and women defending America against radical Islamic terror from his perspective as a forty year member of the United States military, a member of the National Security Council staff and serving as the U.S. government’s counter-terrorism coordinator from 1983-1986. This patriotic book also pulls in new reports and exclusive full-color photographs from War Stories, the award-winning FOX News Channel series hosted by North.

About the Author
Oliver North is a combat-decorated Marine, the recipient of the Silver Star, the Bronze Star for valor, and two Purple Hearts for wounds in action. From 1983 to 1986 he served as the U.S. government’s counter-terrorism coordinator on the National Security Council staff. President Ronald Reagan described him as “an American hero.” A New York Times best-selling author, syndicated columnist, and host of the award-winning War Stories documentary series on the FOX News Channel, North lives with his wife, Betsy, in Virginia. They have four children and twelve grandchildren.