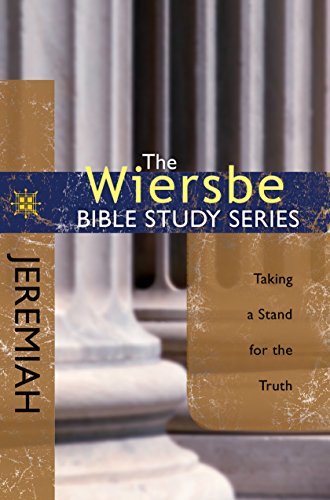 Hundreds of years before Christ’s birth, the people of Judah were in full rebellion. Influenced by the pagan culture surrounding them, the Israelites began to worship idols instead of the one true God. As their depravity grew and destruction loomed, a lone prophet was given an enormous task: call God’s people back to Him.

The Wiersbe Bible Study Series explores timeless wisdom found in God’s Word. Based on Dr. Warren W. Wiersbe’s popular “BE” series of commentaries, each study provides topical, relevant insights from selected books of the Bible. Designed for small groups or individuals, this eight-week study examines events that led to the fall of Israel, while exploring the heart and mission of a prophet who made a decision to stand for the Lord no matter what.

Warren W. Wiersbe
Dr. Warren W. Wiersbe is an internationally known Bible teacher and the former pastor of The Moody Church in Chicago. For ten years he was associated with the Back to the Bible radio broadcast, first as Bible teacher and then as general director. Dr. Wiersbe has written more than 160 books, including the popular “BE” series of Bible commentaries, which has sold more than four million copies. He and his wife, Betty, live in Lincoln, Nebraska.