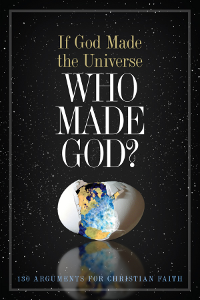 One by one, the facts built a convincing and compelling case. Jesus’ death by crucifixion is as certain as anything in the ancient world. The accounts of his resurrection are too early to be the product of legendary development. Even the enemies of Jesus conceded that his tomb was empty on Easter morning. And the eyewitness encounters with the risen Jesus cannot be explained away as mere hallucinations or wishful thinking. All of this just scratches the surface of what I uncovered in my nearly two-year investigation. Frankly, I was completely surprised by the depth and breadth of the case for Christianity. And as someone trained in journalism and law, I felt I had no choice but to respond to the facts.

Perhaps you remember being in a university class, feeling frustrated when the respected professor dismissed questions from a student because of her religious faith. Or maybe over a business lunch one of your colleagues referred to Christianity as a fairtytale, and you said nothing.

Many Christians find themselves in such situations but don’t speak up because they don’t fully realize the strength of their own position. They feel incapable of giving reasons for the hope that is theirs.

Christian apologetics is the discipline and growing body of knowledge that equips believers to address their own doubts, to converse with seekers and critics from a position of strength, and to bear witness to Christ with confidence.

In the spirit of the title question, If God Made the Universe, Who Made God? collects 130 essays written in defense of the Christian faith. Contributors include some of the pre-eminent apologists of our time, from Lee Strobel and Charles Colson to Hank Hanegraaff, J. P. Moreland, and Ravi Zacharias. The content is grouped into ten topics: